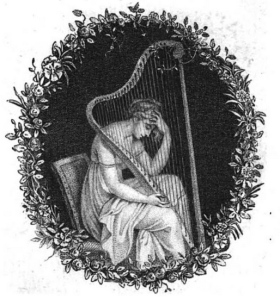 From the title page of Samuel Rogers The Pleasures of Memory, (1805)

PICTURES of harps and harpers in Wales (in chronological order)

A variety of harps are illustrated (including ‘Irish’, three-stringed and pedaled), but in several cases, it is not possible to be certain that the image of the harp is accurate.

The harp was one of several icons of Wales and it appears in a number of 18th and 19th century publications, not all of which are included below.

Many of these images are available on line and others are in Peter Lord and Rhian Davies, The Art of Music: Branding the Welsh Nation, (2022)

1792 (and following)
JULIUS CAESAR IBBETSON (1759-1817)
Ibbetson came to Wales in 1789 and stayed at Cardiff. He toured Wales in 1792 with Sir Robert Fulke Greville and John ‘Warwick’ Smith and may have been in Pembrokeshire in 1797 or 1798 (picture relating to the French Invasion of Fishguard). He may have returned again to the south-east to paint views of the Seven and Wye (one exhibited at the RA in 1815).
It is assumed that the majority of the following works were produced in 1792 as watercolours during the tour, or subsequently as oils, based on watercolours.

1796
artist : Anon
Oil painting on board of Dic Aberdaron (Robert Richard Jones) standing in an interior, with cat, harp and a collection of books. It is substantially the same image as the woodcut by Ellis Owen Ellis (see NLW Ms 697c folio 139)
NLW 4507921

1789 (published 1800)
artist : unknown
Print of a harp, accompanied by a description
‘The musical instruments chiefly peculiar to this country are three, the Telyn or harp, the Crwth and the pibcorn, or hornpipe.
The principal of these is the harp. This, which appears to be the most ancient of all musical instruments, deriving its origins in the most remote periods of antiquity, was formerly so much in use in Wales, that to play upon it was an accomplishment indispensably requisite for every gentleman and upon this is was the chief musician, used formerly to perform in the courts of the Princes of Wales.
{Irish harp, old harps}
Dafydd ap Gwilym’s poem on the harp ‘Cowydd y Delyn Ledr (Poem on the leather harp)
{The origins of the triple harp}
{The Pedal harp}
{continues with descriptions of other musical instruments and music, including the music of Triban Gwyr Morgannwg; Dowch i’r Frwydr; Cwynfan Brydain; Morfa Rhyddlan; Ar Hŷd y Nôs; Nos Galan; Y Gadlŷs; Megan a Gollodd ei Gardas; Difyrrwch Arglwyddes Owen’s; Glân meddwdod mwyn; and 5 others.’}
Bingley, William, A tour round North Wales, performed during the summer of 1798 … (1800), vol. 2, p. 272

1802 (and earlier?)
Frontispiece is a sketch of a harper surrounded by men, women and children, with Dolbadarn castle in the background. The figures drawn by Ibbetson and the landscape by J Smith, etched by Rowlandson.
Jones, Edward, (1752-1824), The bardic museum : of primitive British literature … : forming the second volume of the Musical, poetical, and historical relicks of the Welsh bards and druids (1802 edition)
The Muse so oft her silver Harp has strung
That not a mountain rears his head unsung.
And many an amorous, many a humorous Lay
Which many a Bard had Chanted many a Day.

1809
Print ‘Llangollen Vale’ painted by D Thomson, Engraved by R Scott, published May 1809 by G Thomson, Edinburgh showing a man and woman watching a group of people dancing in a field, accompanied by a harper. ‘Come every shepherd with his love …. Whose fair rewards him with a smile’.
Thomson G., [editor and publisher] A select collection of original Welsh airs, adapted for the voice, united to characteristic English poetry, never before published : with introductory and concluding symphonies and accompaniments for the piano-forte or harp, violin, and violoncello: composed chiefly by Joseph Haydn, [published, in three volumes, by G. Thomson], vol. 1 (Edinburgh 1809), Frontispiece

1810
artist : Harding, J.W.
‘Blind Harpist’, probably North Wales
Book of views, no 14, N Wales, 1810, Pubd. by John Harding, 36 St James Street
NMW, St Fagans : F84.159/3
On the reverse is the following text: ‘The harp is the favourite instrument of the Welch: every town in the Principality has its professor, who, generally, in fine weather, is the tenant of a seat at the door of an inn; and in bad weather, an inmate of the kitchen. Here, at his post, he waits the arrival of strangers, to whom he soon introduces himself with an offer of his services. The Welsh music is varied, expressive, and pathetic. It carries with it an air of originality and great antiquity, and with its congenial instrument, the harp, skilfully touched, is well calculated to warm the imagination and interest the heart.
In no place, perhaps, can happiness be so extremely diffused, as so small an expense, as in Wales. A small present to the harper, for the public use, will assemble the whole population of the village: and in this rustic group, no mode, by which joy can be indicated, will be omitted. Not even the unrivalled scenery of their country will leave so permanent, and so pleasing an impression on a benevolent mind, as this scene of innocent mirth. It is true, they neither dance with the gracefulness of a Frenchman, nor sing with the science of an Italian; but the most fastidious would not wish to exchange this honest, though awkward exhibition, for the purchased exertions of either.
All the families of the great in Wales are still furnished with this feudal appendage of rank and wealth. In their hospitable mansions many an aged harper finds a comfortable asylum …’

1815 (about)
artist : Craig, William,
Watercolour of a Harper accompanying a minuet under the trees
Williams, P.H., The Causes and Effect of Tourism in North Wales, PhD thesis, 2000, p. 354

1819
artist : Hornor, Thomas
‘Night scene from the drawing room of the “Cottage”, a harp under the verandah’
Hornor, Thomas, ‘Tour through the vales of Glamorgan’ by Thomas Hornor, 1819, picture no 11

1834
artist : Anon
Print, similar to the above.
Hugh Pughe of Dolgellau, won a miniature silver harp worth 5 guineas at the 1934 Eisteddfod in Cardiff. Dic Dywyll was a singer.
Betts, Clive, Cardiff and the Eisteddfod, (1978), p. 17 no source quoted

1836 (about)
artist : Anon,
Unsigned portrait, oil on canvas
The subject is thought to be Lady Llanover’s daughter, Charlotte Augusta (born September 1824).
Faculty of Music, Cambridge. The painting was purchased in the Abergavenny area by Nora Chadwick (1891-1972) of Cambridge University who had a collection of harps.

Undated
there were two portraits of Harpers (who might not have been Welsh), in the collection of the Ladies of Llangollen, listed in the Auction catalogue of their possessions, in 1832, after their death
group 1, lot 59, The Blind Harper, a very beautiful watercolour by Richter
group 6, lot 13, The Blind Harper
Auction sale catalogue of the contents of Plas Newydd, Llangollen, 1832, NLW ms 9132D

William L. Roberts,  described as a Royal Welsh harpist. He performed on Aberystwyth Prom between the two World Wars. He was related to John Roberts of Denbighshire and Newtown (sometimes known as the Romany harpers). Although very similar, these photographs were taken at different dates – note that the lamp-posts are different.

Lilias Liston, the great grand-daughter of  William L. Roberts kindly provided the following information:
William Lewis Roberts was the youngest son of John Roberts of Newtown, also known as Telynor Cymru. He was born in Aberystwyth but moved around, living, as a married man, in Cynwyd, Llanrwst, Welshpool and eventually Oswestry where he died. Having been a professional soldier, he had the rank, and title, of Captain of which he was very proud. Willie Roberts (as he was known in the family) was also a talented violinist.

This site uses Akismet to reduce spam. Learn how your comment data is processed.